The Future of Industrial Internet of Things is Software-Defined

The Future of Industrial Internet of Things is Software-Defined

Much of the discussion of the IoT has been about the services that become possible once you connect tens of billions of consumer devices to central servers that can capture, analyze and act upon the data they produce. The IIoT, on the other hand, is about connecting all aspects of industry, from production-line sensors to enterprise resource planning systems, to make it more flexible, agile and responsive.

Standards are emerging for integrating IoT devices in markets such as home automation, often from a (fairly) blank slate. In industry, though, much of the equipment used in production is proprietary, locking customers into the vendor’s ecosystem. This reduces users’ choices, and makes it more difficult for the resultant systems to inter-operate with other equipment from other vendors. Proprietary systems can also be expensive to buy and run, and slow to evolve because the hardware is built in lower volumes than say commercial servers.

A software-defined infrastructure may also be easier to secure than custom platforms, since it can draw on all the work already done to secure cloud-computing systems

The Open Platform Communications standard, developed in the 1990s, addresses some of these issues. As systems become more interconnected, though, device and data security becomes much more important. Developing the necessary layered security architecture may be outside the skills base of proprietary equipment vendors.

A Cue from Telecom

The telecoms sector has already addressed this issue. Telecoms equipment vendors got together to create interoperable solutions based on standard servers — an approach called network functions virtualization (NFV). Many network functions then evolved into software running on these servers, saving operators money, improving their choices and boosting interoperability.

The same is now happening in industrial automation, with the emergence of a software-defined infrastructure for the IIoT. The idea is to consolidate operations and control functions into software running on servers with the performance necessary to run real-time control algorithms.

This approach, using open standards and open platforms, should cut both operating and capital expenditure. It should make it easier to develop interoperable components, and to turn what were hard-wired functions into software that can be treated as components, making it easier to move between servers or re-use. A software-defined infrastructure may also be easier to secure than custom platforms, since it can draw on all the work already done to secure cloud-computing systems.

The International Society of Automation has defined the ISA-95 standard for integrating enterprise and production control systems, with four levels (as in Figure 1). Levels 1-3 are operations and control functions, most of which could be run on servers with enough real-time performance. Level 4 is the enterprise-level business planning and logistics layer. 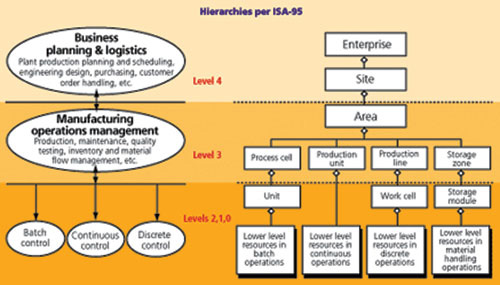 Figure 1: The four levels of enterprise and production control systems defined in the ISA-95 model

Shifting to this model could reduce costs in several ways. Using standard, industrial-grade servers would cut direct costs, as well cutting the spares inventory and training overhead of supporting multiple proprietary devices. It should also make it easier to manage the system centrally, to replace failed software or hardware using ‘fail-over’ techniques developed for larger commercial server farms, and to avoid obsolescence by updating hardware and software components as new versions become available.

• Low-latency virtualization—so software components can move among servers easily, and overall capacity can be adjusted to match demand.

• Deterministic networking—to ensure that all the components in an installation have a shared view of time so that events are processed in the right order.

• High availability—to ensure that new servers and software can be brought into use quickly enough if components fail in a real-time environment: carrier-grade telecommunication NFV solutions are already almost fast enough to do this now.

• Robust security—building on technologies such as secure start-up modes, and robust ‘roots of trust’ that enable a system to check that it is working with legitimate hardware.

• Lifecycle management—to make it possible to patch and upgrade a system without any loss of service.

• Platform monitoring—to enable a software-defined infrastructure to monitor itself so it can guarantee its level of service and automatically reallocate resources as necessary to maintain performance, safety, and resiliency.

• Best-in-class applications—so the infrastructure can work with standard IT technologies such as the Hadoop framework for distributed computing, and Linux.

Building a software-defined infrastructure for the IIoT sounds complex, but can draw on the experiences of the telecom industry’s shift to NFV. So even as the IoT hype begins to run its course, a much more significant transformation of industry through the shift to the IIoT is beginning to gather pace.

Data Integration Is Essential To Winning

How Path To Production Ensures Safety And Soundness On Our Digital...

Bringing People And Technology Together